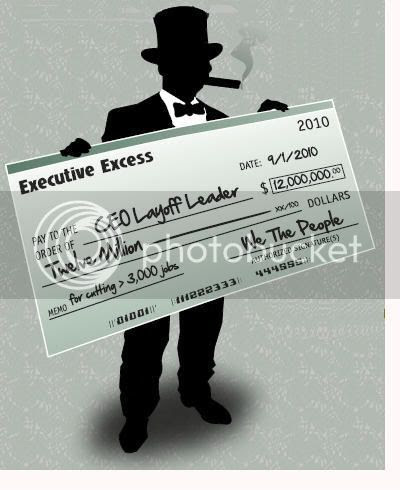 Two new reports combine to present a picture of how our economy works sharply at odds with the rightwing narrative of blaming immigrants and praising the rich as "creators of wealth" who need hefty tax cuts in order to continue "creating wealth" for the rest of us. It should come as little surprise to progressives that this last claim is pure bunk, that CEOs are rewarded for cutting jobs, not creating them. But the news about immigrants may surprise even those who read Open Left regularly. (More below.)

Immigrants expand the productive capacity of the economy, according to a new report from the San Francisco Federal Reserve, based on analysis of state-level data.

Meanwhile, the 17th annual executive compensation survey from the Institute for Policy Studies 'CEO Pay and the Great Recession,' shows that CEOs of the 50 firms that have laid off the most workers since the onset of the economic crisis took home 42 percent more pay in 2009 than their peers at S&P 500 firms.

From the IPS press release:

'Our findings illustrate the great unfairness of the Great Recession,' says Sarah Anderson, lead author on the Institute study. 'CEOs are squeezing workers to boost short-term profits and fatten their own paychecks.'

In contrast, it turns out that immigrants serve as a medium- and long-term stimulus to the economy:

The Effect of Immigrants on U.S. Employment and Productivity

The effects of immigration on the total output and income of the U.S. economy can be studied by comparing output per worker and employment in states that have had large immigrant inflows with data from states that have few new foreign-born workers. Statistical analysis of state-level data shows that immigrants expand the economy's productive capacity by stimulating investment and promoting specialization. This produces efficiency gains and boosts income per worker. At the same time, evidence is scant that immigrants diminish the employment opportunities of U.S.-born workers.

Switching gears back to the IPS report, the figures show that although over-all CEO pay is down slightly from pre-crash highs, the compensation level remains far higher than in previous decades: 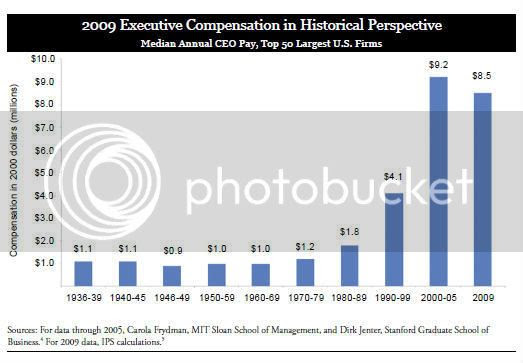 And yet, the Right continues to rave on about illegal immigrants being the problem and CEOs the saviours! Talk about a non-reality-based belief system! We are truly in the world portrayed in Orwell's 1984 when so many citizens are convinced that their corporate overlords are beneficent and that their brothers and sisters in poverty are the enemy.
Posted by Cosmogenium's Convo at 5:18 PM No comments:

Not Even Hiding It Anymore.

New Alaska Senate nominee Joe Miller tells CNN he wants to end Social Security. 'CNN's JOHN KING: How about an American born tomorrow or born the day after Joe Miller was sworn in in Washington? Would that person perhaps grow up in an America where there is not a federal Social Security program if you got your way? JOE MILLER: Absolutely.'

Posted by Cosmogenium's Convo at 4:17 PM No comments:

Posted by Cosmogenium's Convo at 2:41 PM No comments: