The Church of Fiscal Conservativsm

The Church of Fiscal Conservativsm 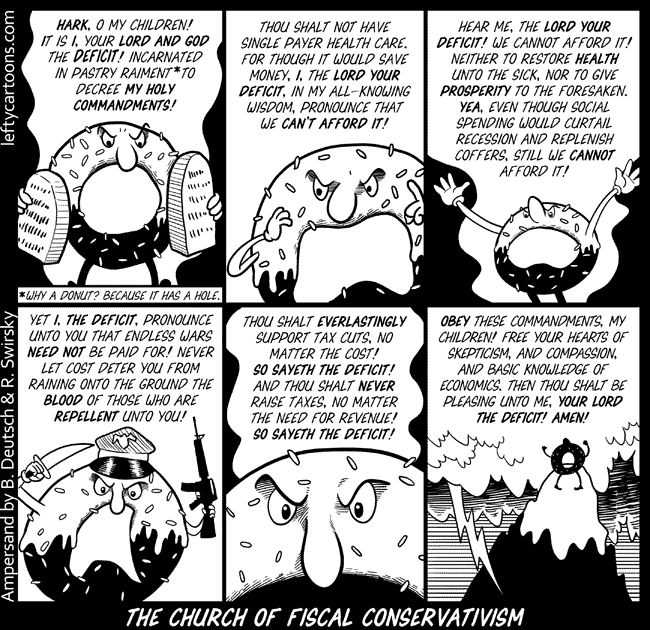 This cartoon was co-written by Rachel Swirsky.

Panel 1: An angry-looking cartoon donut yells at the reader. The hole in the donut forms the donut’s huge, yelling mouth; the donut also has cartoony-looking, angry eyes, and a big nose. The donut is holding two stone tablets Moses-style.
DONUT: HARK, o my children! It is I, your LORD AND GOD the DEFICIT! Incarnated in pastry raiment to decree MY HOLY COMMANDMENTS!
FOOTNOTE: Why a donut? Because it has a hole.

Panel 2: Donut, now without tablets, continues yelling.
DONUT: Thou shalt not have single payer health care. for though it would save money, I, the LORD YOUR DEFICIT, in my all-knowing wisdom, pronounce that we CAN’T AFFORD IT!

Panel 3: Donut gestures hugely, arms above head.
DONUT: Hear me, the LORD YOUR DEFICIT! We cannot afford it! Neither to restore HEALTH unto the sick, nor to give PROSPERITY to the foresaken. YEA, even though social spending would curtail recession and replenish coffers, still we CANNOT afford it!

Panel 4: Donut is now wearing a US Army officer’s hat, and holding a automatic rifle in one hand and a knife in the other.
DONUT: Yet I, THE DEFICIT, pronounce unto you that endless wars NEED NOT be paid for! Never let cost deter you from raining onto the ground the BLOOD of those who are REPELLENT unto you!

Panel 6: The donut is shown very distant from the reader, at the top of a steep mountain. There are clouds behind the donut and a lightning bolt is coming from one of the clouds.
DONUT: OBEY these commandments, my children! free your hearts of skepticism, and compassion, and basic knowledge of economics. then thou shalt be pleasing unto me, YOUR LORD THE DEFICIT! AMEN!

There is a caption at the bottom of the entire cartoon, which says, “The Church of Fiscal Conservatism.”

This pretty much says it all. The Right set up the deficit so they could use it to justify their agenda, even though it makes no sense whatsoever to cut taxes and services when they are needed the most. The media is complicit in this charade, and the public is as gullible as they want it to be.

Posted by Cosmogenium's Convo at 12:35 PM