Yesterday we talked a little about how Republican state governments have taken such harmful and extreme positions-- particularly in states like Florida, Wisconsin, Ohio, Maine, Arizona and Michigan-- that voters are expressing, and acting on, very high levels of buyer's remorse. Others haven't woken up yet; even Skeletor (R-FL) still has almost 30% of his state's voters behind him. Perhaps these people recall when conservatives were even worse and think that in retrospect it's not that bad... at least not yet.

The last time the GOP and an overly-entitled plutocracy they serve, a plutocracy, like ours, that hasn't been slapped down in a very, very long time-- thank you Jimmy Carter, Bill Clinton, and Barack Obama-- the conservatives went a lot further towards forcing their dark, dystopian vision on the nation. I was just reading the part in Glen Yeadon's book Nazi Hydra In America where he talks about how Hitler learned all about eugenics from American conservatives, just as he had cribbed so much of his virulent anti-Semitism from Henry Ford.

By the turn of the century, women were still barred from voting. Racial hatred was the norm. Native Americans had been segregated on reservations Blacks and Asians were considered second class citizens and undesirables. Vigilantes often dispensed what passed for justice at the end of a hangman’s rope. From 1889 until 1918, 3,224 people were lynched. More often than not, the victim was black although 702 of the victims were white. Moreover, the hangings were carried out for trivial reasons such as staring at a white girl, offensive language, or other such minor infractions.

Eugenics would soon become a cure all for society’s problems. Criminal analysis would move racial hatred and criminal behavior into the realm of heredity and eugenic cleaning. Disease and physical afflictions, such as tuberculosis and epilepsy, were also considered hereditary disorders.

...In mid July 1911, the special committee met in Manhattan and systematically plotted a campaign to purge the blood of American people of the deteriorating influence of these undesirable anti-social classes. Ten classes of the socially unfit were identified. The classes were as follows in the rank given by the committee: feeble minded, pauper, alcoholics, criminals including petty criminals, epileptics, the insane, the constitutionally weak, those predisposed to certain diseases, the deformed, and finally the blind and deaf. Not only did the ABA target the individuals afflicted, but also targeted their extended families as well. The group agreed that sterilization of the extended families was desirable.

The eugenic committee had endorsed a very ambitious plan. The plan prioritized the sterilization of those receiving custodial care, including those in poor houses, insane asylums, prisons, and any others under state care. This group contained approximately one million people. The plan called for the further sterilization of borderline cases of some seven million people deemed by the ABA to be totally unfit to become useful parents or citizens. The estimated eleven million people targeted for the first wave was more than ten percent of the population. After the first wave was completed, the plan called for the sterilization of the extended families of those deemed unfit. 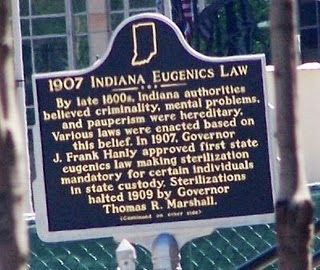 By 1906, Sharp claimed to have performed 206 vasectomies, even though the procedure was still not legal. While Sharp was very influential in the passage of Indiana’s sterilization law, he was by no means alone. Reverend Oscar McCulloch, the pastor of the Indianapolis’s Plymouth Congregational Church, was a leading reformer and advocate of public charity while harboring a deep hate for the poor. Indiana law specified a compulsory servitude for its paupers. They could be farmed out to the highest bidder. MuCulloch performed his own genealogical survey of Indiana’s wandering tribe of paupers called the Tribe of Ishmael. MuCulloch’s survey of the Tribe of Ishmael quickly became a centerpiece of eugenics studies. MuCulloch preached to his congregation that the paupers were parasites and preordained to be nothing more. ... Washington State passed a bill mandating sterilization of habitual criminals and rapists. Connecticut passed a law allowing the medical staff to examine patients of two asylums for the feebleminded and their family trees to determine if the patients should be sterilized. California enacted a bill that allowed castration or sterilization of convicts and residents of the state home for the feebleminded.

The same parasitic families that are bankrolling the Republican Party today, bankrolled the rise of Hitler and bankrolled the attempted coup d'etat against FDR, bankrolled the takeover of the American media and... the American eugenics movement. They never get punished and they just get more monstrous with each generation. Today they've brought us Scott Walker, Rick Snyder, John Kasich, Paul Ryan, John Boehner, Rick Scott...

Parasitic families in the U.S. have been funding extreme right wing conservatives here and abroad for centuries. They have yet to be punished for their treasonous actions and plutocratic methods.

Posted by Cosmogenium's Convo at 9:44 AM