Watchdog: Nuclear Regulators' Action on Safety Issues Is Too Slow, Not Well-Tracked 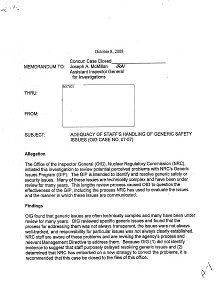 As the Fukushima Dai-ichi nuclear power plant disaster in Japan continues to unfold, POGO, like many others, is concerned about the effectiveness of the U.S. Nuclear Regulatory Commission's (NRC) oversight of nuclear power here. The NRC's internal watchdog, the NRC Office of Inspector General (OIG), has questioned the aggressiveness of the NRC’s oversight as well. Case in point: an FY 2009 NRC OIG investigation close-out memo on the “Adequacy of [NRC] Staff’s Handling of Generic Safety Issues” that POGO obtained through the Freedom of Information Act (FOIA).

The OIG looked into this matter because the “lengthy review process caused the OIG to question the effectiveness of” the NRC’s system for managing generic safety issues.

The NRC’s “generic safety issues” are safety problems that the NRC has identified as applicable to a wide-range of nuclear power plants. According to the memo:

generic issues are potential safety concerns involving the design, construction, operation, or decommissioning applicable to several, or a class of, NRC licensees, certificate holders, or other entities regulated by or subject to the regulatory jurisdiction of NRC.

The OIG found that the NRC’s Generic Issues Program, which is used by NRC to analyze and recommend solutions related to generic safety issues, “does not clearly assign ownership for each issue to a particular NRC office and is not transparent to NRC senior management or the Commission.” Also, the safety issues were not always “well-tracked.”

Why is it always like pulling teeth when it comes to public safety issues? Well, because the "public" has lost all representation in the "republic" due to the fascistic takeover of government by the ultra-rich and the mega-corporations. Unless we move quickly and decisively to avert the control of government here by the richest few and their lobbyist armies, democracy as we have known it in the U.S. is over. It may already be too late.

Posted by Cosmogenium's Convo at 3:51 PM