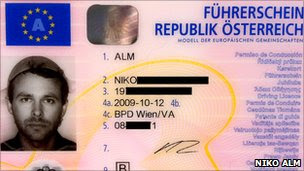 An Austrian atheist has won the right to be shown on his driving-licence photo wearing a pasta strainer as "religious headgear".

Niko Alm first applied for the licence three years ago after reading that headgear was allowed in official pictures only for confessional reasons.

Mr Alm said the sieve was a requirement of his religion, pastafarianism.

The Austrian authorities required him to obtain a doctor's certificate that he was "psychologically fit" to drive.

The idea came into Mr Alm's noodle three years ago as a way of making a serious, if ironic, point.

A self-confessed atheist, Mr Alm says he belongs to the Church of the Flying Spaghetti Monster, a light-hearted faith whose members call themselves pastafarians. 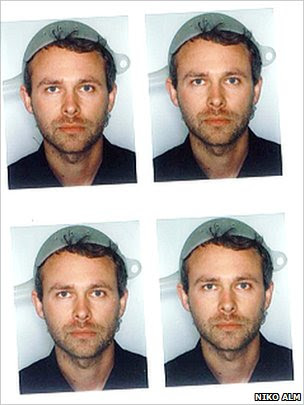 The group's website states that "the only dogma allowed in the Church of the Flying Spaghetti Monster is the rejection of dogma".

In response to pressure for American schools to teach the Christian theory known as intelligent design, as an alternative to natural selection, the Church of the Flying Spaghetti Monster wrote to the Kansas School Board asking for the pastafarian version of intelligent design to be taught to schoolchildren, as an alternative to the Christian theory.

In the same spirit, Mr Alm's pastafarian-style application for a driving licence was a response to the Austrian recognition of confessional headgear in official photographs.

The licence took three years to come through and, according to Mr Alm, he was asked to submit to a medical interview to check on his mental fitness to drive but - straining credulity - his efforts have finally paid off.

It is the police who issue driving licences in Austria, and they have duly issued a laminated card showing Mr Alm in his unorthodox item of religious headgear.

The next step, Mr Alm told the Austrian news agency APA, is to apply to the Austrian authorities for pastafarianism to become an officially recognised faith.

Touched by his noodly goodness!

Posted by Cosmogenium's Convo at 11:26 AM

May the Pastafarians make an ever bigger splash.

1) After denying so vehemently that atheism is not a religion the Pastafarian sect of atheism fights for equal rights to freely express their religious beliefs. As Niko Alm states it, his goal is for “Pastafarianism to become an officially recognised faith in Austria.”

2) The Flying Spaghetti Monster actually proved was that some people are utterly ignorant of natural theology / general revelation. These propose the best that science and philosophy have offer as to the universe’s coming into being. They propose that the universe had a creator and even identify some of the creator’s characteristics.
See http://www.truefreethinker.com/articles/flying-spaghetti-monster-invisible-pink-unicorns-et-al-part-1-4