Of course, a lot has happened since my last entry. We lost the election. It's hard to believe that so many people could be so greedy/ignorant/ditzy/fanatic/ or whatever it takes to put such a bunch of twisted thugs in control of the most powerful country in the world, but it happened. Maybe the results were fixed and maybe we're just that stupid.

Anyway, now the fate of the future is in play. For those who have read A Handmaid's Tale, the writing is on the wall. 1984 is all too obvious.

On a brighter note, I'm back to working in my profession again. No, it's not because the jobs situation improved in upstate New York; it hasn't much. I just got desparate enough to pull a string offered by a friend and got re-instated to my old position with the state of New York. I'm in a much better situation than when I left, at a different agency with a nice group of people. My foray into the private sector didn't lead where I would have preferred. When the tech sector hit the skids, so did the company I was with. 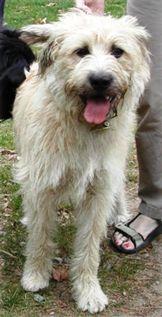 We have a dog now. He's a terrier-lab mix (I call him a wire-haired Labrador) that we named Cosmo. We love him dearly. He's been limping on his front-left leg lately. The vet couldn't find anything wrong with it. He thinks it's a sprain or muscle pull. Trying to keep Cosmo inactive is nearly impossible. One thing we can do is not take him to the dog-park where he loves to play with the other dogs. We're not happy with this solution, but it's necessary until he heals.

Life goes on. Things will change. Let's hope we can raise our collective I.Q. in time for the next round of elections.
Posted by Cosmogenium's Convo at 6:04 PM