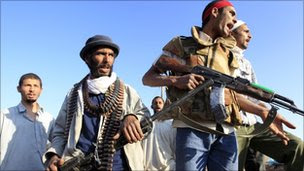 I didn't know the name of the man barely out of his teens who was busy dying in the room next door.

Neither did Dr Suleiman Refadi who emerged from the operating theatre covered in his blood to pronounce him dead.

I don't know what he did before this war began. He may have been a skilled engineer, an inspired artist or a humble shopkeeper.

What I do know is that, as a soldier, he was a fool.

So foolish that he tried to clean his gun by banging it on the ground with the safety catch off, firing a bullet into his chest and creating an exit wound in his neck from which he bled to death.

And he was not alone. Ajdabiya was full of people like him - and increasingly so was its hospital - during the worst days of the fighting in eastern Libya.

Most had been injured by Gaddafi's troops. Others by their own side.

The fighters I met on the front line were generally aggressive, arrogant and clueless. That wasn't only my opinion.

Back in April, I met Magdi al-Shiek. He was in his 30s and was standing in the shadow of Ajdabiya's Western Gate, cradling a gun that was twice as old as he was.

"The young rebels will not listen because they believe this is their revolution," he told me.

"They say 'I am now free. I can do what ever I like'. But it's the ones that waste ammunition that are the very first to run to the back when there is an attack."

Now, two months on, the arches of the Western Gate of Ajdabiya are gone.

Gone too are the bands of ill-disciplined young men strutting around with their weapons slung over their shoulders like electric guitars.

The hospital that was a constant hive of activity is almost empty.

"We haven't had a casualty for three or four weeks," one of the medical staff told me. I tracked down Dr Refadi again. "What happened?" I asked him.

"You British stopped it," he told me with a big grin as he kissed me on both cheeks.

"You are in charge now. The British commanders came and said 'Stop, no more fighting!' And it all stopped."

The war on the eastern front is now in stalemate. The same could be said for the entire conflict. Using Western air power to save the residents of Benghazi from Gaddafi's troops was a good tactic to save lives. It was not a strategy to rid the country of his regime.

The mandate from UN resolution 1973, which authorised member states "to take all necessary measures… to protect civilian and civilian populated areas", has now been stretched so tight that you could get a tune out of it.

Since it was written, the aim of the game has clearly changed but the rules by which it is being played have not.

They explicitly exclude "a foreign occupation force of any form on any part of Libyan territory" - which is why it is taking such a long time to finish.

And nobody, particularly the French and the British, seems to know how to play the winning card, though both are hoping the new attack helicopters which went into action this weekend will trump Col Gaddafi and his men.

But they simply may not have as many cards as they need. The British carried out a strategic defence review which basically said that the UK should get rid of lots of expensive military hardware because after Iraq it is not going to have anymore wars of choice.

So they started getting rid of that expensive stuff and then the government signed up to... a war of choice. Oops.

Oh and yes - it is a war in Libya, let's stop pretending that it's not. It's that seductive little phrase "'regime change" again but this time in a new dress. 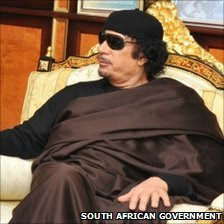 Nato leaders want Col Gaddafi to go, but have no mandate to remove him

Lots of experts in the British government are itching to say: "I told you so". Many were unsure about the war right from the start and nothing that has happened since has made them change their minds.

The unemotional simply don't understand what Britain gains from all of this.

It might not have been so painful if the Obama administration had not completely wrong-footed the British and the French governments by making a quick exit and taking their best toys with them.

It has left the British once again pondering what they consider to be the "conundrum" of US foreign policy towards the Middle East.

So who is running it?

One thing for sure is that for the time being, it's not the young macho men with the AK-47s and for that everyone should be grateful.

But when Col Gaddafi is eventually ousted, as he surely will be, the reality of a post-war Libya will shine though.

A nation deeply divided on tribal, geographical lines and now political lines full of young men armed to the teeth no longer united by a common enemy and who often won't listen to anyone.

If the Libyan civil war looks like a mess now, much worse may be waiting around the corner.

The British and French governments may eventually look back on these quiet if confused days with a wistful nostalgia.

via bbc.co.uk
Posted by Cosmogenium's Convo at 7:44 AM